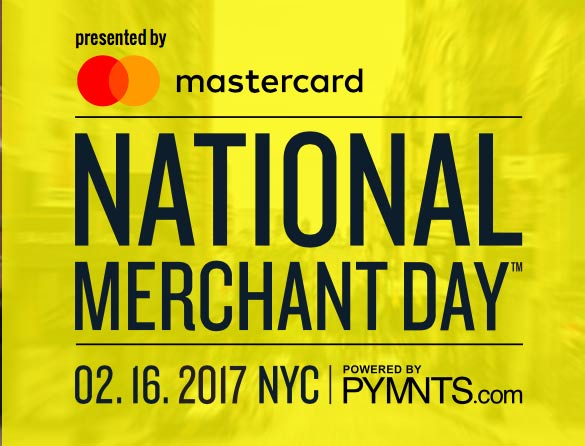 National Merchant Day is PYMNTS’ annual focus on the innovators and innovation that will help storefronts that line main streets and side streets of our local communities survive. NMD gives attendees a hands-on experience of the cutting-edge technology that will transform the next generation of commerce—from New York and beyond. The latest innovations will be shown, with leading payment technologies from cutting edge solution providers.

PYMNTS.com’s first annual National Merchant Day (NMD) event kicks off today in NYC. The “Un-Conference,” as PYMNTS refers to NMD, offers a place for merchants, solution providers and consumers to share their insights on the future of payments within the retail industry.

The timing of NMD is not coincidental, and comes when the strength of the retail industry is in question.  A recent article by PYMNTS’ Karen Webster explains that small businesses within the United States, known by most as the pulse of the U.S. retail industry, is in a state of crisis and has been for decades. This may come as a surprise to many, but economists tracking the success of small businesses provide substantial evidence that is tough to ignore.

There are a few reasons for the small business decline, Webster explains. Part was due to the financial crisis of 2008, where businesses crumbled and never fully recovered – leaving fewer businesses opening. Other factors include business closings. The Small Business Administration sites that 60% of small businesses won’t make it past their first birthday, and only a third will cross into double-digits to celebrate being in business for a decade.

Historically, that failure rate was eclipsed by the sheer number of new business starts each year. More businesses opened than closed — until 2008. That year, for first the time in more than 30 years, SMB closings outnumbered openings — and by a big margin. That year, the country was left with a deficit of roughly 100,000 small businesses. And that trend line really hasn’t reversed course all that much since then.

The state of small businesses may seem like news to all of us now, but economists have been tracking the steady decline for 30 years. PYMNTS’s article breaks down the scary but true statistics.

The Big Guys Control the Market

Most consumers can take a quick glance at their own credit card bill and confirm that the big box retailers – think Amazon, Walmart, Target and the like – are dominating the retail market. Yes, convenience, inventory and multiple purchasing methods (in-store and online) all play a big role in why consumers may choose the big guys over a small business, but there are other reasons SMBs are struggling, “ranging from an onerous regulatory environment that makes it harder, longer and more expensive for new businesses to get started, to banking regulation that has cut off the supply of capital to small businesses.”  Webster relates the retail market to “The Darwin Theory” — the survival of the fittest.

Economists increasingly point to a concentration of businesses now across just about every sector. An Economist report published in 2016 showed that the top four companies in more than 40% of the 900 industries they examined controlled more than a third of the market. That was up 28% from just two decades earlier.

As bleak as things may seem for small business owners, many still have a positive outlook on 2017. A recent New York Life Insurance Co. survey found small business owners are optimistic about the year ahead and making investments in their business. This optimism, refreshingly, outpaces that of the general public 60% vs. 43%.

Small-business owners are planning to build their companies in many ways, the survey reported, and are ready to double-down on their business.

“Small-business owners have big plans for 2017, with many looking to incorporate tech, seek capital, hire, improve offerings to employees and explore ways to better manage their money,” said Brian Madgett, vice president, New York Life. “We’re hearing positive economic sentiments across the country in our conversations with small-business leaders. With this shift in attitude comes a renewed interest in financial planning and is no wonder that 55% report they plan to engage a financial professional for assistance as it relates to their business needs in 2017.”

“Call me crazy, perhaps, but I’m looking at the glass half-full here and pointing to the 62% of the market up for grabs — ready to be reinvented by the creative minds of entrepreneurs who can tackle the retail sector now with an arsenal of tools and platforms that help level that playing field and give them a fighting chance. It’s that optimism, that belief in the power of how small and medium and large retailers take advantage of these innovations to transform retail, that is one of the reasons that we, at PYMNTS, were inspired to create National Merchant Day.”

In 2014 and 2015, the vulnerabilities of retail point of sale systems were exposed through several high-profile data breaches. These breaches have cost companies hundreds of millions of dollars and rocked consumer confidence. In a large percentage of breach cases, malware was the culprit, infiltrating the retail system and stealing clear-text cardholder data to be later sold on the black market.

Payment innovators like Bluefin share in the optimism that both NMD and small businesses possess for the future of retail, and are proud participants of National Merchant Day.

Bluefin’s PCI –validated Point-to-Point Encryption (P2PE) solutions for retailers encrypt cardholder data at the point of entry, preventing clear-text cardholder data from being present in a merchant’s system or network where it could be accessible in the event of a data breach, therefore rendering the data useless to fraudsters.

Bluefin will exhibiting at NMD today, displaying their P2PE solutions and how they can protect your business from fraud.

Keeping Credit Cards Secure: Everything You Need to Know About CSC Numbers
June 24, 2022

The Rise in Recurring Payments – and the Need for Account Updater
May 17, 2022
Go to Top
UPCOMING WEBINAR